This will be the last year LMP1 class that has roots that go back to the World Manufacturers
Championship , that Alfa Romeo competed in and won in 1975 and 1977. It wasn’t until 1975 that it won , after years of trying, that Alfa Romeo won the World Championship for Makes. The 1975 season was one of almost total domination with seven wins in eight races. 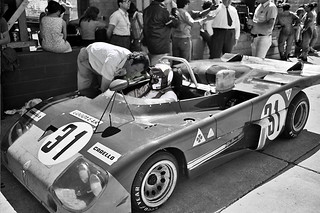